The second edition of the Feltre Staged Opera Scenes course was another great success.

Both concerts had a great turnout and the response from audiences on both nights was hugely positive.

Participants described their experience of singing on Feltre’s opera stage as “amazing”, “an adrenaline rush”, “an honour”, and a “unique opportunity”. One student described Feltre as “walking into a movie set”.

No doubt, the charm and beauty of Feltre is truly unique and alluring, which makes the Vox Staged Opera Scene course an incredible opportunity for singers and lovers of Italian opera. During a very short, but incredibly intense time, whilst living in this gorgeous Italian town, surrounded by art, beauty and wonderful wine and food, it is impossible not to be inspired.

The intensive workshop which takes place in the heart of this historic Italian citadel at the foot of the Dolomites, provides singers with the opportunity to live and breath Italian culture and language.

Feltre’s “palazzi” are known for their frescoed facades; the 16th and 17th century balconies, adorned with colourful, draping geraniums and petunias harken back to Shakespeare’s Romeo and Juliet. The town itself could be the backdrop to a movie set, or Shakespearean drama.

Vox Integra is immensely grateful to the city and people of Feltre for being so welcoming and supportive of its work and mission - which in Feltre, among other things, is to help singers find their true voice and confidence in singing Italian opera repertoire, as well as to transform lives - literally. Some of Vox’s regulars - Voxsters, as we like to call them - are unrecognizable from two years ago. The journey for many has been extraordinary to behold. Vox could not be more proud than to see this fantastic group of singers - young and older, professional and passionately amateur - bond, push themselves, develop, grow, sing and perform together so courageously, authentically and beautifully.

“During this week we’re all friends. We support each other.

Vox aspires to create a friendly atmosphere, while at the same time providing professional level training. Jamie Hayes, this year’s Stage Director called it a “boot camp” of sorts. So much happens in such a short amount of time. It’s no wonder deep bonds and friendships that will inevitably last a lifetime are formed among the participants.

“It’s a great team, vibrant, expert and fun to be with. And all in this idyllic setting. Wow!”

The exceptional level of coaching, tutoring, training and teaching rivals any top international academy or conservatoire. Vox Integra prides itself on working with acclaimed educators that have both professional teaching and performance backgrounds. This year’s musical director Igor Kennaway boasts a career in conducting worldwide, including the legendary Bayreuth. Jamie Hayes, acclaimed stage director, works regularly with renowned opera companies from England and Australia to Iceland. Theresa Goble, mezzo-soprano, Founder of Vox Integra and Professor of Vocal Studies at the Guildhall School of Music for over 25 years has performed throughout Europe and the U.S.A. Her students can be seen on the stages of the world’s major opera houses. Beverley Worboys, trained at the Guildhall, has both classical and musical theatre experience, and has performed extensively in the UK and Europe, from London’s Westend to Italy’s famed Spoleto. Jean Rigby, guest masterclass artist, has performed all over the world, including Salzburg and Glyndebourne, among many others. Coaches and accompanists Brian Parsons, internationally renowned Tenor, Voice Professor and Vocal Coach and Michael Pugh, Pianist, Accompanist and Coach have worked with singers their entire career and offer a breadth and depth of knowledge and support that is truly rare in these days of fast and superficial “music" making. Vox Tutors are chosen for their experience, but also for their sensibility to the Vox philosophy of rigorous training, paired with constructive and positive support and reinforcement.

Igor Kennaway, first time musical director for Vox, broke into tears during one of the rehearsals because of the magic that was happening right before his very eyes and ears. He called Vox Integra’s course “A little miracle”. He later described watching singers blossom, open up, become more confident as a result of living out their dreams on one of the most beautiful opera stages in Italy, and expressing how truly moving and profoundly emotional it was.

Click on picture below for web link and video.

Catch our patron Peter Rose at the Metropolitan Opera! 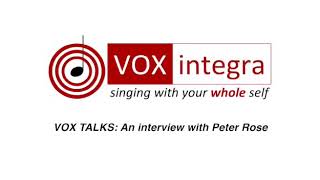 What should I look for when selecting the best vocal summer course, workshop or masterclass ?

Italy Inspires. Period. And that's the beauty of working here.